The Beatles' road manager from the summer of 1963 until the Beatles broke up, twenty-six year old Malcom Evans was working as a communications technician for the Post Office in 1962 when he discovered the Beatles playing at the Cavern during his lunch break, and he was hooked. He started spending a lot of time at the Cavern, and became friends with George Harrison, who recommended him as bouncer at the Club. He had been guarding the door at the Cavern for about three months when the pace was getting so hectic for Neil Aspinall and the Beatles that they decided to take on Mal to help.

For all of the Beatles' tours, Mal drove the van, set up and tested the Beatles' equipment, and then packed it all up again after each show. It was mild-mannered and friendly Mal who interacted with the excited crowd before the show while the Beatles stayed in their dressing room. This freed up Neil Aspinall, the original road manager, to look after the boys' personal needs and safety. Mal also assisted Neil in forging the Beatles' signatures on their publicity photos. 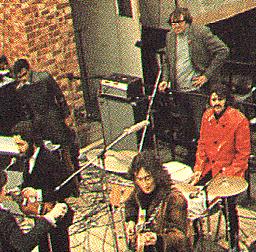 While John was off filming How I Won The War in 1966, Mal accompanied Paul on his African Safari. In the later years, after the Beatles stopped touring, Mal continued to be their constant companion, assisting them in the studio. He can be seen setting up equipment in the very first scene of the Let It Be movie, and is pictured here with Paul, John, Ringo and Billy Preston during the rooftop concert. In addition to Let It Be, Mal can also be seen in the movie Help! in the recurring joke as the swimmer asking for directions to the White Cliffs of Dover, and was also in Magical Mystery Tour.

Mal even made it onto many Beatles recordings. He's among the voices on Yellow Submarine. He played the Hammond organ on You Won't See Me. He counted off the measures in the breaks of the song A Day In The Life during early sessions of recording the rhythm track, his voice can still barely be heard on some of the released mixes, and he was one of the four piano players simultaneously hitting the last note of the song. He played some harmonica on Being for the Benefit of Mr. Kite. He played the tambourine on Dear Prudence and the trumpet on Helter Skelter. And he sang along on You Know My Name (Look Up The Number) and the long unreleased What's The New Mary Jane. In the Let It Be movie, Mal can be seen playing the anvil during early verions of Maxwell's Silver Hammer, but Lewisohn records that Ringo actually played that on the record. In 1968, Mal brought his discovery the Iveys, who later became Badfinger, to the Apple recording family.

Mal was the only person of the Beatles family to attend Paul and Linda's wedding in 1969. After the dissolution of the Beatles, Mal moved to Los Angeles, and died tragically on January 5, 1976 in a misunderstanding with the police because he had a gun.