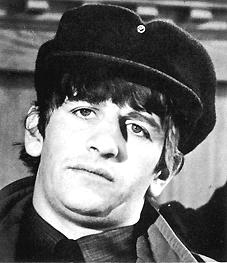 Richard Starkey was born in a small two-story terraced house in the Dingle area of Liverpool, on July 7, 1940, making him the oldest Beatle, three months older than John. His father, who's name was also Richard, was originally a Liverpool dock worker, and later worked in a bakery where he met Ringo's mother Elsie. His parents broke up in 1943, and Elsie later married Harry Graves, who little Richie called his "step ladder".

Although remaining cheerful throughout his childhood, it was filled with hospital time, for appendicitis at 6, at which time he went into a coma for two months, and a cold which developed into pleurisy when he was 13, causing him to miss much school. By fifteen he could just barely read and write.

Like the other Beatles, young Ritchie also eventually became caught up in Liverpool's Skiffle craze. After starting his own group with Eddie Miles called The Eddie Clayton Skiffle Group in 1957, he joined The Raving Texans in 1959, a quartet which played while Rory Storm sang. During this time, he got the nickname Ringo, because of the rings he wore, and because it sounded "cowboyish", and the last name Starr so that his drum solos could be billed as "Starr Time".

Ringo first met the Beatles in Hamburg in October 1960 while there performing with what had become Rory Storm and The Hurricanes. Ringo joined the Beatles on August 18, 1962. Rory Storm was magnanimous about the theft of his drummer, but Pete Best fans were upset, holding vigils outside Pete's house and rioting at the Cavern Club, shouting "Pete Best forever! Ringo never!" His health would cause him problems again later, he missed three quarters of the 1964 tour of Scandanavia, Holland, the Far East and Australia, to have his tonsils out.

The Beatles' first movie, originally to be called Beatlemania became to be called A Hard Day's Night because it was something Ringo had said one evening after a long and particularly grueling session.

Ringo married his long-time girlfriend Maureen Cox on February 11, 1965, and they had three children, Zak, Jason and Lee.

About his early drumming, Ringo said:

"I started to be an engineer but I banged me thumb on the first day. I became a drummer because it was the only thing I could do. But whenever I hear another drummer I know I'm no good. John learned me the song I sing. I can only play on the off beat because John can't keep up on the rhythm guitar. I'm no good on the technical things but I'm good with all the motions, swinging my head, like. That's because I love to dance but you can't do that on the drums.

"I figure we're good for another four years. I don't want to invest me money in stocks or anything. I just want to have it and draw twenty or thirty quid a week. The main thing is, I don't ever want to go back to work."