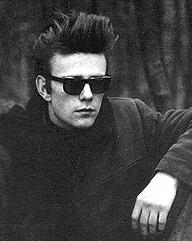 Stuart Sutcliffe was born in Edinburgh, Scotland, on June 23, 1940. At 19, Stu was regarded as one of the most talented and promising students at the Liverpool Art College, when he met fellow art student John Lennon. All of the girls liked Stu because of his moody, romantic scowl, sunglasses, and resemblence to James Dean. Stu even lived like an artist, in a cramped, paint splattered house near the school. John lived there with Stu for a time, spending long nights drinking and sharing their passions for art.

When Stu sold a painting in 1959 for £65, an unheard-of sum for a student's painting in those days, John convinced him to buy a bass guitar and join the band, never mind that he couldn't play. Before their first big break, a two-week tour to Scotland backing Johnny Gentle, Stu is partially credited with coming up with the name Beatles, by jokingly suggesting "Beetles" as a play on Buddy Holly's Crickets. Back in Liverpool, violence was common at the shows they played at, and one night, after a show at Litherland Town Hall in the north of Liverpool, the Silver Beatles were ambushed as they made their way out into the car park to their van. In the fight, Stu went down and was kicked in the head. Later at home, still bleeding from the gash in his head, he refused to let his mother call a doctor. 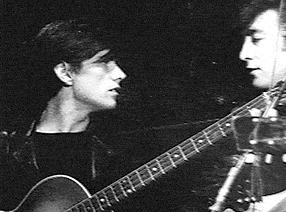 While in Hamburg, Stu met Klaus Voorman, who introduced him to Astrid Kirchherr, and they quickly fell in love. Astrid changed Stu's clothes and gave him a new, distinctive hair style, which all the Beatles later adopted. While on their second Hamburg t rip, Stu started to study art again, at the Hamburg State Art College, where Astrid had studied, allowing him to quit the Beatles gradually. When the tour ended and the rest of the Beatles went back to Liverpool in 1961, Stu stayed in Hamburg with Astrid . Stu died on April 10, 1962, from a brain hemmorrhage, following a series of violent headaches. Ironically, the Beatles were to arrive the next day to start their third Hamburg tour.

Click on the small images below to see larger representations of Stu's self-portrait and one of his multimedia paintings.